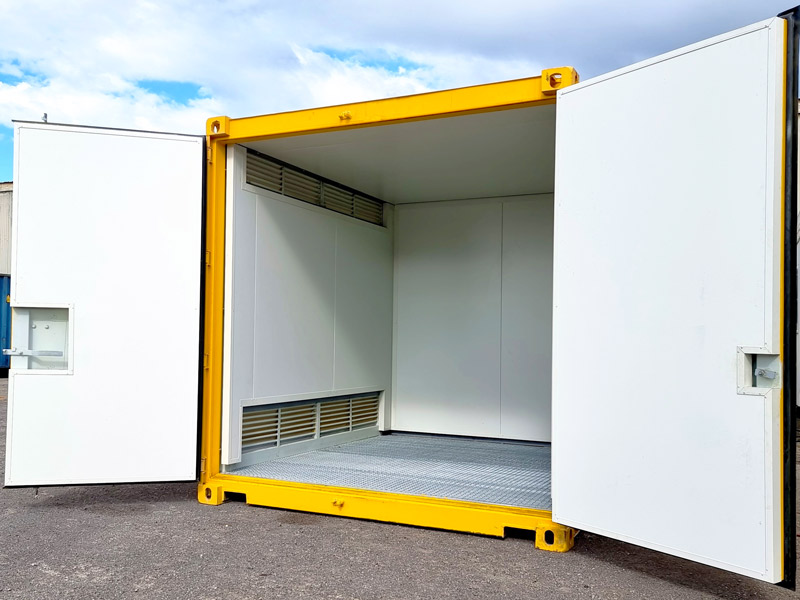 With fines up to $290,000 for individual offenders, if you store dangerous goods and substances at your workplace, please don’t wait for the EPA to knock on your door. Our Dangerous Goods Shipping Containers are a fully compliant solution and with a fast turnaround time.  Dangerous Goods Shipping Containers built by Containify are compliant to Australian standards and come in a range of sizes and classes to match your worksite. 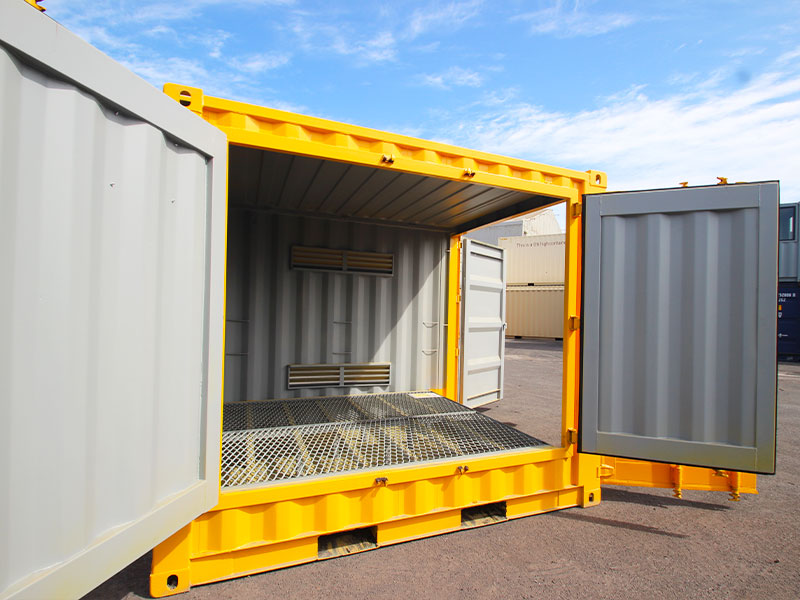 What are Dangerous Goods?

Dangerous goods are substances the are flammable, water reactive, explosive, combustible, corrosive, oxidising and any other hazardous properties. To find out if a product is a dangerous good you can:

Head Spinning, We can help! 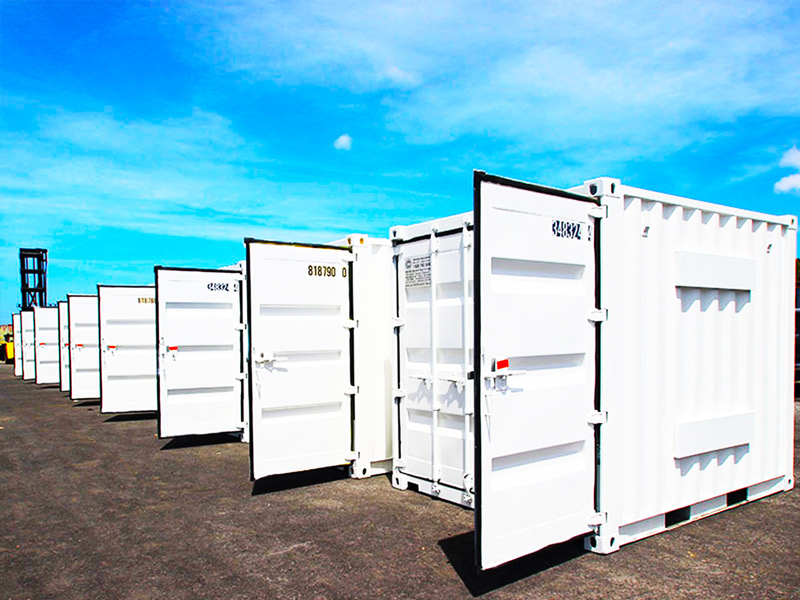 Depending on the class of Dangerous Goods Shipping Container you require, some of these features may vary slightly to be in line with our Australian standards and compliance. 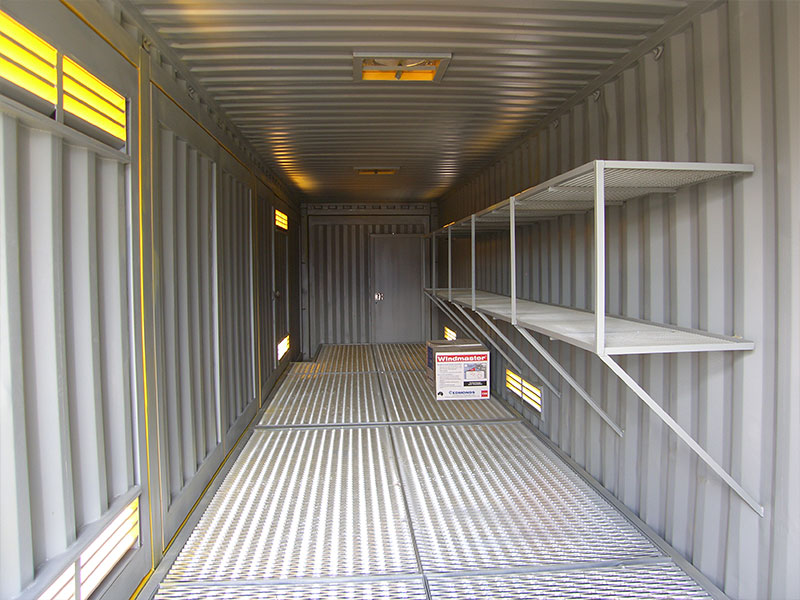 Containify will provide a solution and container size for any chemical storage need. From a 10ft dangerous goods shipping container to store paints and thinners. Right through to super large 40ft side opening unit with overhead gantry to move 1000L IBC’s full of liquid fertiliser by hand. Find the specifications and sizes you need.

Explosives are materials or items that can quickly catch fire or detonate from a chemical reaction. Explosive reactions can produce catastrophic damage through hazardous amounts of heat, sound, gas, smoke, and gas. Some explosives that need to be stored in a class 1 dangerous goods container is: Flares, Fuse, Primers, Igniters, Rockets, TNT and fireworks.

Gasses can be very dangerous and can be toxic, corrosive, flammable and can even deplete oxygen in the air. The Australian standards define this as a substance with a vapor pressure of 300kPa or higher or at 50 degrees celsius or is completely gaseous at standard atmospheric pressure of 20 degrees celsius. Common examples of class 2 dangerous goods: Aerosols, insecticides, methane gas, and helium.

There are 3 sub divisions within this class, Flammable solids, substances liable to spontaneous combustion and substances which emit flammable gasses when in contact with water. Some examples of class 4 products would be, sodium batteries, matches, sulphur

This class of dangerous goods has a high oxygen content and are often reactive materials. Some oxidising agents can be explosive if heated strongly. Substances while in themselves are not necessarily combustible but may contribute to the combustion of other materials.

Organic Peroxides are hazardous because of their ability to chemically oxidise matter and even living tissue. Organic peroxides are thermally unstable and can emit heat and give off vapours, flammable, or harmful gasses. Some examples of this class would be, Peracetic acid, Dibenzoyl peroxide, Acetyl acetone peroxide, butyl peroxydicarbonate

These are poisons that can damage the human body and must not be allowed to find its way inside, trough swallowing, breathing through contact with skin. This class are liable to cause death or serious injury. Common examples are, chloroform, lead compounds, mercury compounds, potassium fluoride, tear gas substances.

It is very important to store corrosive substances in a safe and compliant way. They can cause severe damage to other materials, property, and the human body. A segregated dangerous goods shipping container with its own spill containment is required. Some examples include batteries, hydrofluoric acid, sulfuric acid and sulphides.

There are substances that present a danger of hazard and are not covered by the other classes. Some examples of class 9 dangerous goods are zinc oxide, lithium ion and genetically modified organisms, fuel cell engines , plastics moulding compound.

With a great understanding that, each business if different and so are their Dangerous Goods Shipping Container needs. Compliance and Safety are our top priority and matching the right container to your hazardous storage requirements. Containify will never offer a generic solution instead insist on knowing all the data and our advice accordingly. Dangerous Goods Shipping containers can be dispatched quickly so please call today to talk to a consultant.

Other Products that may interest you

Check out our most popular products below that are reccomended for you. 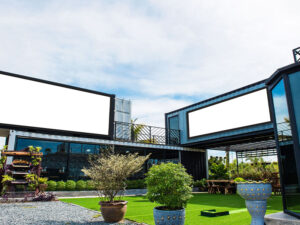 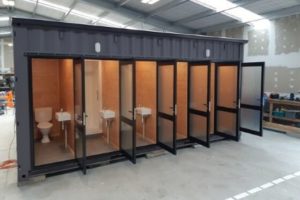 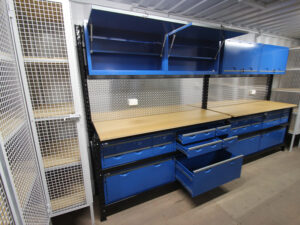 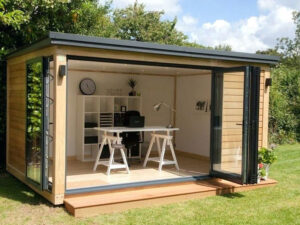 Request a Quote on a
Dangerous Goods Shipping Container

Explore, Inspire and create with a team that are here to help your dream come true.

Take the steps to move from ambition to action.

fill in the below details to receive an information pack today!

Shipping container bar, designed to be robust and functional.

Modified shipping containers that are custom build to your needs.